Excerpt from Eric and Nikki Finding Their Way

Nikki Gallaway sat in her car shaking trying to get her license and registration card out as the police officer was approaching.
She had been turning the radio station and looking at the time racing home as she noticed lights in her mirror. She was already 30 minutes late getting home and just realized she had left her cell  phone at home. When the cop approached the window he said,

“Good evening ma'am.  Do you know why I pulled you over?”

“Ummm I am not sure,” She replied.

“Well Ma'am you were going almost 15 miles over the speed limit. Can I see your license and registration please?”

She handed him the license and her registration card.  The officer walked back to his car.

Nikki was about to cry as she thought, “Eric is gonna be soo angry.” 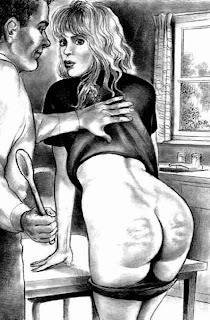 Nikki raced home. She was hoping that she would beat Eric home and she thought she did. She didn’t see his truck outside. She went inside and sat her stuff down on the table. She saw a piece of paper on the table which said,

“Hey babe its 5:30.  I was going to take you out to dinner but you aren’t home. I’m starving so I will see you when I get home. Love ya.  P.S. Get yourself something to eat, take a shower and be standing in the corner when I get home. We have a long night ahead of us. OOhhhh and I found your cell phone for you on the table.”

She picked up her cell phone and saw that she had 15 missed calls from him. She squirmed and didn’t feel hungry at all but she knew he would ask if she had eaten and if she said no she would be in more trouble for defiance. She had gone shopping with his twin brother Gregg's wife Abbie .

Gregg and Abbie had a traditional marriage as well but Gregg didn’t have tight reigns on her yet.  Eric understood it was because they were young and so was Eric and Nikki but Gregg didn’t go through the problems with Abbie that  Eric went through with Nikki. It still drove Eric crazy when she hung out with Abbie but Abbie was family and Nikki was an adult and he just had to work harder on Nikki..
This day he specifically told Nikki, “I’m going to trust you to behave and be home by 5.”
She said, “I will.”
They both knew that that was a tough one to achieve when she was with Abbie because Abbie could often sweet talk Gregg or lie to him and get away with things.

Nikki choked down a sandwich and walked up to their room. She wanted to call Eric and see when he would be home but she knew that would get her into more trouble. She just didn’t want to stand in the corner forever but she knew she had to do it. She went and took a shower going as slow as possible.  As she was getting out of the shower, she heard him pull up. She hurried up and dried off putting on her robe to go stand in the corner. After a shower she was aloud to wear a robe.  She stood there for what seemed like forever wondering what he was doing. Finally he came up.

He walked in and said, “Drop your robe. You may not speak unless spoken too. You may only say Yes Sir and No Sir. Understood?”

“Yes Sir.” She replied in a quiet voice.
He sat down on the edge of the bed and watched as she dropped her robe. He thought to himself, “Oh God she is beautiful, such a perfect body and her long straight sandy blonde hair hanging down to the middle of her back.” As he ran his eyes down each curve, he finally said, “Come here.”
She stood there a minute trembling.  She didn’t know if he knew about the speeding ticket. She wasn’t sure what all she was in trouble for.
When she didn't respond immediately, he said, “NOW!!”

She slowly walked over. “Yeess-Sirrr.”

“What time did you get home?”

“Did you have car trouble, flat tire, run out of gas?”

“So no reason that would keep you from being home on time except for, you lost track of time, You didn’t care what time you got here or Abbie gave you lies to tell me so you wouldn’t get into trouble. Any other reason than those?”

He grabbed her arm and placed her over his lap. He started off light covering every area of her bottom over and over again. SMACK...SMACK. Then he began to smack harder and harder.
“When I tell you”  SMACK....SMACK "to be home at a certain time I” SMACK....SMACK “expect you to be home at that time.  “Is that understood?”  She was starting to cry and tried to mumble out her response. SMACK....SMACK. “DO YOU UNDERSTAND!!!??” He came down hard.

He then picked up the hair brush he had beside him and SMACK....SMACK causing her to jump and yell,

Harder and harder he smacked her making her bottom a bright chrisom red. She started sobbing and after thirty swats with the brush he stopped.  He then stood her up and pulled a chair over beside him.

“I....I.... I....Weell you ccalledd Righhtt before I...I was leaving and I had put my phhonnne in mmy purse then I sat it on the table when I hhuunngg up with you.” She is bawling and can barely speak.

“So how do you think I felt when you were home late and you didn’t answer your phone?” he asked her.

“I umm you were worried," she responded.

“I don’t know how to get you to take your phone with you.”

“Eric I can’t!  ERIC PLEASE SIRRR!!”
WHACK... WHACK...WHACK. Her begging and pleading fell on deaf ears.  He got to ten and she moved,

"Alright, back into place.   We are starting over.”

Her bottom was welting up and he hated to start over but he knew he couldn’t go back on his word. He put his hand in the middle of her back to help her stay in place. WHACK... WHACK.  She cried and sobbed. She was starting to give in.  WHACK.... WHACK. He then pulled off his belt. As she heard his belt come off she almost buckled. He moved her over to lay flat on the bed.  “ Ok its almost over, count them.
Whack “One, Sirrr.” WHACK "Two,Sirrr." WHACK. “Three, Sirrr.”

Her count was so quiet he could tell she was done so he came down with two more hard and fast WHACK....WHACK.  He then threw the belt down and laid down beside her rubbing her back.

"All is forgiven,"he told her.

“Shhh baby,“ he told her as he continued rubbing her back. “I’ll be right back.”

He went and got the Arnica gel and rubbed it all over her bottom softly as she squirmed  and started relaxing. He then put her under the covers and she fell asleep.   He went downstairs to call his brother Gregg. He wanted to talk about the hunting trip on Saturday since it was only a couple days away.

What will he do when he finds out she got another speeding ticket???

www.cddtakeninhandstories.com - for the rest of the story
Posted by Cdd Taken in Hand Stories at 1:45 AM No comments: